PEOPLE METERS FROM THE NEW YEAR ON: EXTENDED FUNCTIONS AND THOROUGHER AND FASTER SOLUTION – ANOTHER PERIOD OF THE ATO´S AND NIELSEN´S PROJECT OF TV AUDIENCE MEASUREMENT HAS KICK-STARTED

Another five-year period of the Project of Cross-Platform Measurement of TV Audience and Content Consumption in the Czech Republic, sponsored by the Association of Television Organisations (ATO) and implemented by Nielsen, a Czech research agency, which has been undertaking the audience measurement in the Czech Republic already for 20 years (from 2002 as Mediaresearch and later as Nielsen Admosphere), kick-started in January 2023.

Under the agreement, concluded by the ATO with Nielsen in June last year, the project offers for the upcoming period especially the comprehensive measurement of the TV audience, covering the main needs of the TV market in the area of the television programme creation and effective measurement of the return on investments within the framework of (television and online) broadcast. The measurement follows up on the previous successful period of the project (2018–2022) and, at the same time, it reflects recent changes in the media consumption.

The new wave, for example, accentuates the trend of non-linear viewing of the TV content both on classical and Internet platforms and joint reporting of the results. An extension of the functionalities concerning the non-linear (time-shift) viewing is provided by the Nielsen´s Adwind Kite software, enabling to analyse the time-shift viewing with a higher accuracy.

A reaction to the changing conditions is also provided by the Introductory and Continuous Surveys, which are the most important calibration sources of the project. To a much greater extent, they use a combination of inquiry techniques in order to provide the possibly strongest response of various groups of respondents. In this way, they also solve the situation of a limited availability of personal questioning, which we have experienced in recent years due to the COVID-19 pandemic.

For the future, the project enables further extensions (based on the modules offered by Nielsen) so that it could keep covering the constantly changing needs of the television market. Some of these solutions –  such as the application of the Return Path Data from IPTV or another extension of the cross-platform functions – are still being discussed. Like in the past, however, the innovations are not directly tied with the five-year cycles of the projects, but they are undertaken on an ongoing basis.

More details about the current parameters of the project are provided on the websites of the ATO, or on the Czech websites of Nielsen.

What is connected with the new five-year period of the project is also the modernisation of the popular-educational website www.peoplemetry.cz, raising public awareness about the principles of principles of the TV audience measurement in the Czech Republic. 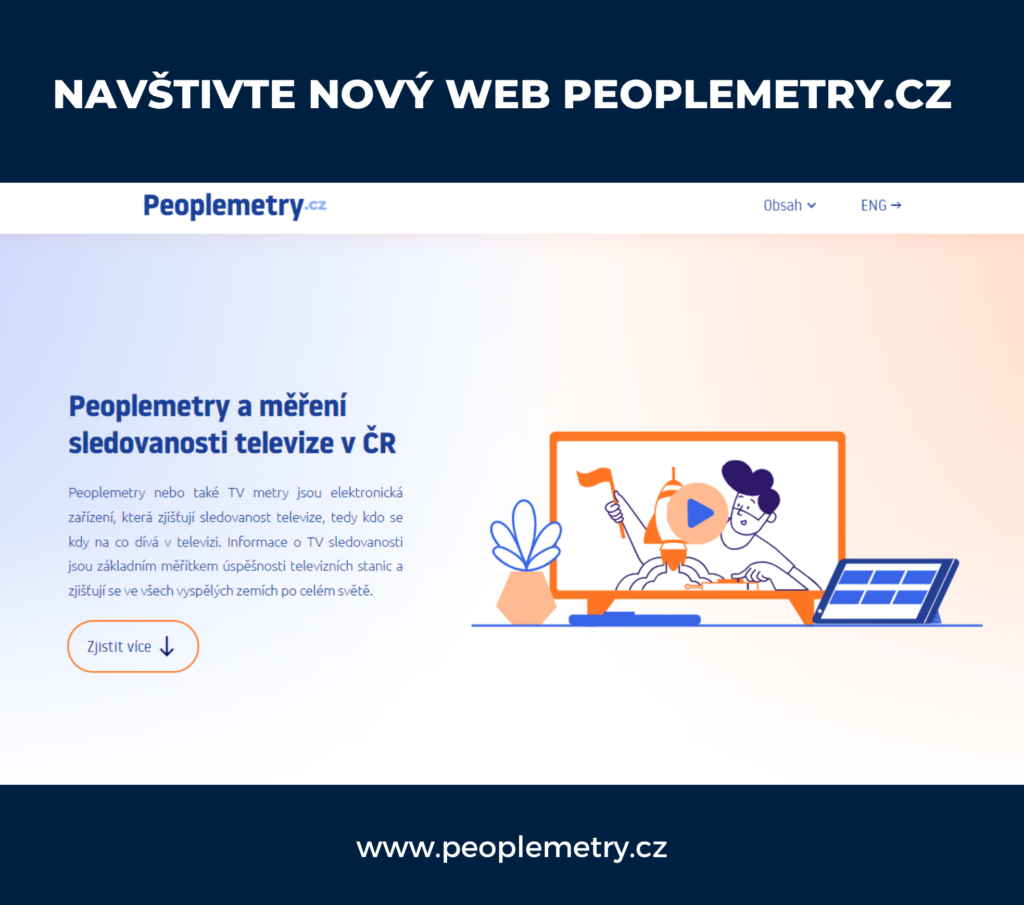 Last year, Nielsen celebrated the 20th anniversary of its cooperation with the ATO (from 2002 as Mediaresearch and from 2015 as Nielsen Admosphere). Moreover, the electronic measurement of TV audience has been sponsored by the ATO already since 1997. So last year they commemorated 25 years of the existence of the measurement in the Czech Republic. Over the time, the project made a significant progress from minute measurement of linear broadcast by several channels on the panel of 600 households to measuring a hundred channels broadcasting on many platforms (including HbbTV, computers, mobiles and tablets), second measurement of various forms of broadcast including Video On Demand and delayed viewing using different technologies. At the same time, one of the main pillars of the project is still the measurement on people-meter panel of households, which has been increased to 1900 households. This number represents a sample big enough, which is above standard even compared internationally. The final data are available two hours after the end of the measured day, while preliminary data are available almost in real time.