A quarter century ago, the United Nations established 21 November to be the World Television Day. Television companies all over the world perceive this day as appreciation of the important role they play in providing information and entertainment. The Association of Television Organisations (ATO) joins the congratulations and illustrates the power of TV with a range of interesting data on TV viewing in the Czech Republic.

Viewing figures are based on the Cross-Platform Electronic Audience Measurement and Content Consumption Measurement Project (PCEM), involving a representative sample of 1900 households possessing a TV receiver, which corresponds to 4450 individuals. The project is implemented by the research agency Nielsen Admosphere for the Association of Television Organisations.

The ATO has never believed the myth that spread with the onset of the internet that “TV is dead” as they daily work with data that reliably disprove this statement. TV is still the most popular medium and people dedicate to it almost 4 hours on average every day. The difficult Covid-19 time has proved that TV is a medium providing not only entertainment, but also information and education. For many Czech households, TV has become a partner and a guarantee of amusement and relaxation at the difficult time that we are still facing. We can illustrate the importance of TV with data on TV viewing from the Project of Electronic Measurement (peoplemeter project) implemented by the ATO via the Nielsen Admosphere research agency.

The average time spent watching TV by viewers 15 years old and above is recorded by the ATS indicator in hours and minutes. The curve over the past 10 years shows significant rise in the past so-called Covid years when TV was the most popular source of information and entertainment. The average 15+ Czech watches TV almost 4 hours a day.

Looking at the time series, it is apparent that time spent watching TV increased significantly during the 2020 lockdown and the trend continues this year. With its varied program offer, television provided alternative to closed schools, theatres and sports facilities. 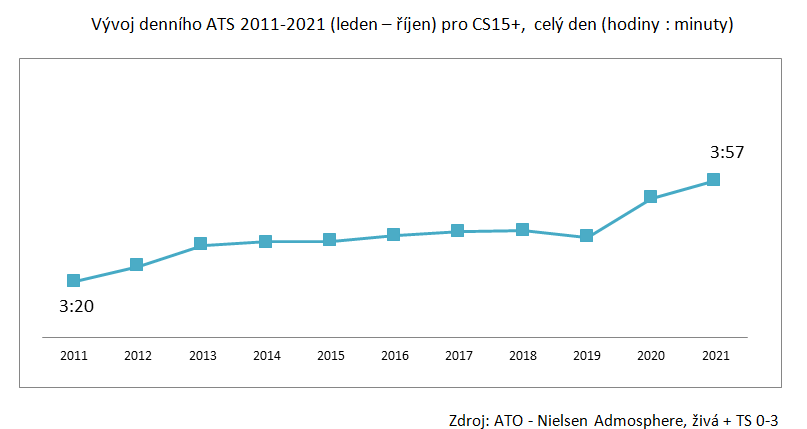 The data further show that in the first 10 months of 2021, over 6.8 million viewers in the general target group aged 4+ watched television daily (the average number of viewers who watched the given channels for at least 3 minutes continuously).

Time spent in front of the TV clearly illustrates the changes in lifestyle associated with growing age. Generally, young people around 30 prefer out-of-home entertainment, meeting friends, sports activities, attending cultural performances, going to bars and restaurants. Year-on-year ATS data for October show that age categories 25-34 and 35-44 spend more than 2-3 hours a day watching TV. Therefore, it would be definitely not true to say that television is uninteresting for young people. On the one hand, we may associate the autumn rise in viewing with shortening day length or colder weather; nevertheless, 2020 in its extreme values is clearly connected with the pandemic (3 hours 20 minutes with CS 35-44). This year has not been so extreme, but still the viewing time with the above-mentioned target group exceeded 3 hours. This year’s successful program offer of TV channels has supposedly added to the increase. 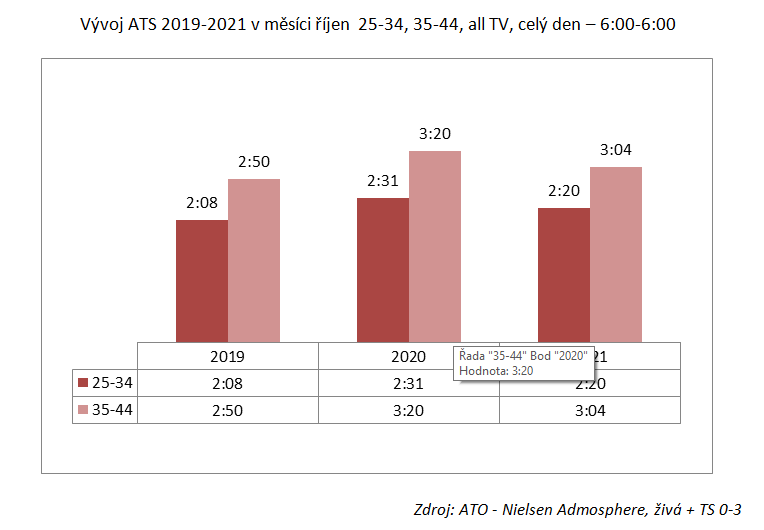 In terms of broadcasting time division, the time frame between 7 and 8 pm belongs to the so-called prime time, i.e. the most viewed part of broadcast every day. Area-wide TV channels like Czech TV 1, Czech TV 2, Nova, Prima, CNN Prima News and TV Barrandov dedicate this space to their main news programs. Peoplemeter data clearly show that compared to the pre-pandemic period (year 2019) the average viewer rating of main news increased by 4 % last year and by as much as 6 % this year, amounting to the total of 2.6 million viewers daily in the 15+ target group.

The managing director of the ATO Vlasta Roškotová commented on the TV data. “The data over the past two years clearly show a trace of the pandemic’s impact on common population’s television behaviour. At the time of Covid restrictions, the time spent watching TV substantially increased, with the biggest rise during lockdown. The pandemic was not the only cause of this increase though. It contributed to it significantly, but it was certainly not the only factor. The growing overall viewing time is stimulated also by the increasing market fragmentation with improved targeting of individual target groups, starting new genre channels, program offer is generally more varied, there is also an important benefit of delayed viewing via HbbTV or IPTV that is becoming more and more popular. We will see what the future brings, but for now everything shows that TV is an important part of everyday life.”

As every year, the ATO carried out three waves of special questionnaire survey in 2021, the so-called Continuous Survey, which – thanks to the co-operation and helpfulness of respondents throughout the Czech Republic – generates unique data required for adjusting the setting of the TV audience measurement project.

The ATO’s Continuous Survey is a rolling quantitative questionnaire survey on a selected sample of households, representative with respect to the population of the Czech Republic according to the current data of the Czech Statistical Office.

The Continuous Survey data show the main ways of receiving TV signal in Czech households. The last available research wave (data collected in July-September 2021) performed on a sample of almost 3 thousand households indicates that most households (45 %) use digital terrestrial signal DVB-T2, 19.7 % watch TV via satellite, 13.4 % are equipped with a cable and almost 22 % watch TV via the internet (IPTV). 83 % of Czech households have internet connection.

The main ways of receiving TV according to individual platforms (%) 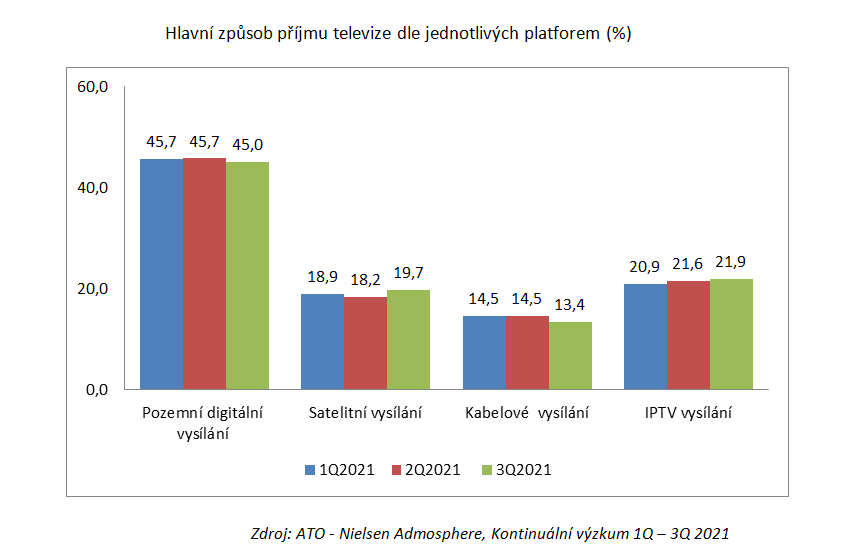 Television broadcasting takes many forms in modern and technological world today. Various end devices may be used to view programs, such as regular or smart TV, PC, tablet, laptop or mobile phone. Broadcast is available across the technological spectrum on various platforms: DVB-T2, cable, satellite and IPTV. Taking a look in the ATO’s data, we can observe that TV remains the most popular medium.