Record Breaking Month of March: influenced by coronavirus pandemic, TV viewing figures were at their top in 17 years

The absolute top level of viewing figures was reached  in the first two weeks of movement restritions, with the year-to-year growth by more than an hour.

The TV viewing figures are collected under the Project  of Cross-Platform Electronic Measurement of TV Audience and Content Consumption (PCEM), on the basis of a representative sample of 1 900 households having a television receiver, which corresponds to 4 450 individuals. The project is implemented by the research agency Nielsen Admosphere for the Association of Television Organisations.

It has already been written a lot about the increase in media consumption in the period of the coronavirus pandemic, so let us focus rather specifically on television and TV viewing figures in the last weeks. This March was record-breaking in terms of TV consumption: with the levels of the average daily viewing figures being the highest of all months for the last 17 years. Since the mid March, TV viewing figures have been higher in all sociodemographic groups, with the highest year-to-year increase (even by a half) in the last five weeks experienced in the groups of young viewers, university educated persons and “A” group of the socioeconomic classification ABCDE.

The chart below shows the comparison of TV viewing figures day after day from the beginning of March with average values of these viewing figures for the last three years (the same day in the week, the same serial number of the week, the average for the years 2017–2019). The data show that until 9 March the TV audiences were at the level of the previous years. The prohibition of events with more than 100 participants and the closure of schools from 11 March caused that people started spending more time at home and, in addition, watching news programmes much more. It ultimately led to the increase in the TV viewing figures by almost 30 minutes a day. Another leap in viewing figures occurred in the period from Monday 16 March after the free movement of persons was restricted: from then on, the  level of the viewing figures was even by one whole hour above the usual level achieved in the same time of the year.

This unprecedental level of viewing figures was maintained for whole two weeks  (12th and 13th week). Between 13th and 14th week, the figures already dropped, like in other European countries. People seem to have gradually adapted to the new situation and for example started to spend more time outdoors anyway. This was also supported by transition to the summer time at the end of March, which provided an extra hour of daylight for outdoor activities early in the evening.

The fact that spending time in parks and in nature remained the only legally permissible art of spending time out of home caused that in despite of the “quarantine“, the weather had a significant influence on TV viewing figures. The long period of nice weather from 5th to 12th April for example contributed to the fact that the viewing figures went down to just 20 minutes above the average of the last three years. A repeated growth of the viewing figures was resurrected only by the Easter holidays on Friday and on Monday and also by deterioration of the weather on Monday and Tuesday. 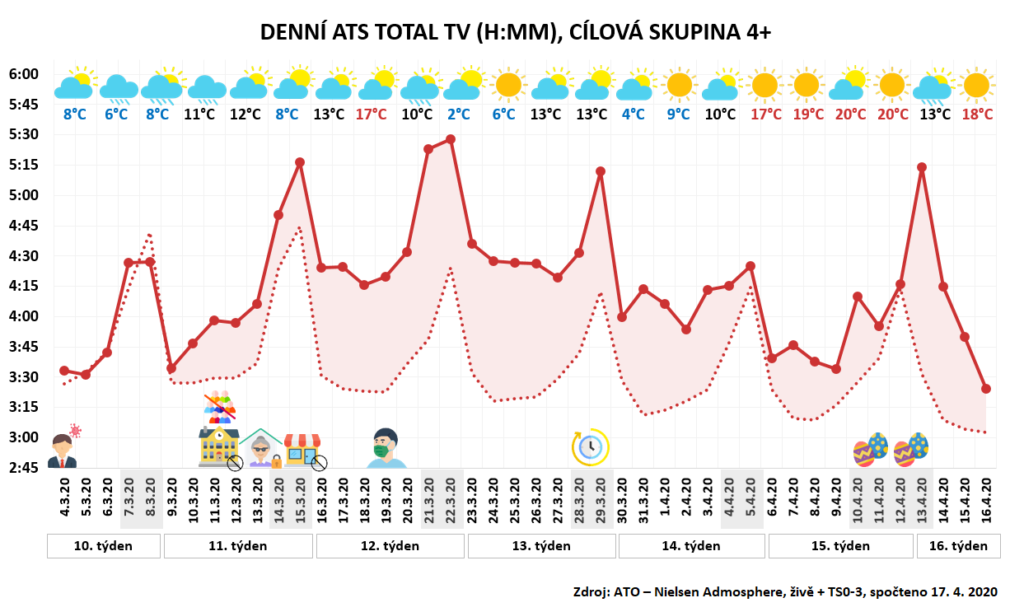 The year-to-year increase in the TV viewing figures in the period from 11 March to 14 April (5 weeks) can be seen throughout all parts of the Czech population. On the average, this increase makes   25 %, in absolute terms it is 52 minutes. There is no much difference between men and women, but there are groups of population where for various understandable reasons this relative increase is more significant: economically active viewers (as compared with the last year, this group experienced an increase in the viewing figures by 33 %), children aged 4–14 (37% increase), university educated persons (38% increase), the highest ABCDE socioeconomic group “A“ (42% increase) or young people aged 15–24 (even 53% increase). 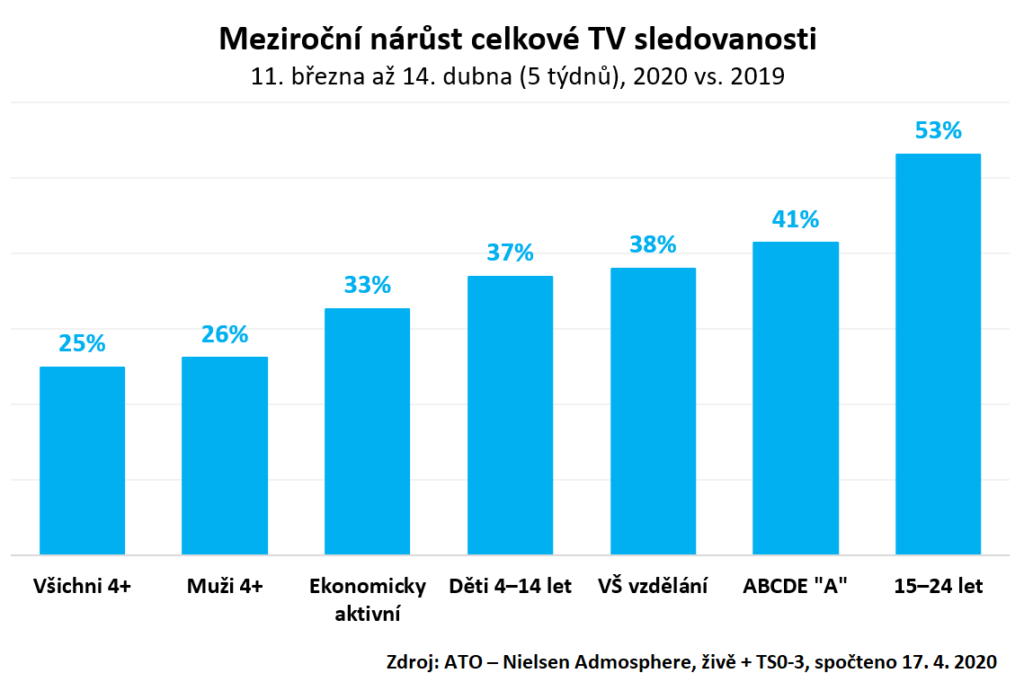 As far as the time spent by watching specific types of programmes is concerned, a significant increase in the audience in the last five weeks was experienced by news and public affair programmes – in the last weeks both of them equally focused on the coronavirus pandemic and on the governmental measures adopted in this connection. However, an increase can also be observed in educational, religion-related and music programmes representing a certain substitute for the respective type of activities in public space. Also feature films are doing very well, benefiting from the plentiful time spent at home and the need of the people to relax.    On the contrary, the growth of TV audiences of series and entertainment programmes was restricted from a certain point of time by the impossibility to shoot new episodes. And the cancellation of an overwhelming majority of sports events adversely affected the TV audiences of sports programmes.