Television reasserted as the predominant medium in coronavirus crisis

On the occassion of the approaching World Television Day (21 November), this is the right time to remark that this year has been a very important one for this medium. The COVID-19 pandemic specifically has confirmed the dominant role of television among media types: the viewer ratings saw a record-breaking spring and now we are witnessing a record-breaking autumn. And all of this is going on the new DVB-T2 platform.

The data on viewing draw on the Project  of Cross-Platform Electronic Measurement of TV Audience and Content Consumption (PCEM) involving a representative sample of 1 900 households owning a television receiver, which corresponds to 4 450 individuals. The project is implemented by the Nielsen Admosphere research agency for the Association of Television Organisations.

The high viewing figures recorded last month had not been precedented in the Czech peoplemeter project in any past October month since the start of the project in 1997. The daily viewing in the 15+ viewers target group was 4 hours and 18 minutes, which is, compared to the average figures of the same month over the past three years, 35 minutes more. However, television is the medium that people spend most time with even from the long-term perspective. The prevailing way of receiving TV is still terrestrial digital broadcasting. “The unprecedented increase in TV viewing and completing the transition to the higher technology standard of DVB-T2 are undoubtedly two outstanding aspects that are necessary to mention on the occasion of this year’s World Television Day,” stated the managing director of the Association of Television Organisations Vlasta Roškotová.

This year’s COVID-19 pandemic made the media world face a number of new situations and experiences; however, in the case of television, it primarily confirmed its role as a particularly important source of information and way of spending leisure time. The curves of the chart below clearly show that in certain months especially, viewing figures in the 4+ viewer group achieved really high levels compared to the average over the previous three years. “This is undoubtedly due to the coronavirus pandemic which for one thing closes us down in our homes where TV is often our natural companion and for another it creates a great hunger for information. And information is, especially in the time of crisis, something that television brings abundance of,” Tereza Šimečková, the Chairwoman of the Board Nielsen Admosphere, comments on the figures. As for viewing, October 2020 even became the strongest of all preceding October months since the start of the peoplemeter project in 1997. 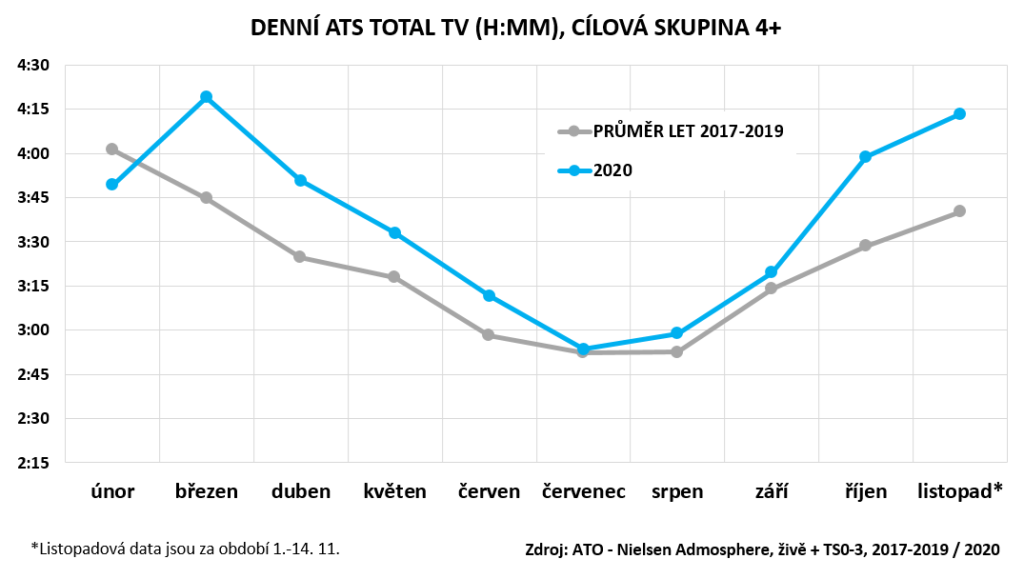 At the time of the pandemic, the increase in viewing is apparent in all target groups of the Czech population – overall, in the 4+ group the increase was one-quarter in the spring wave, and one-fifth in the autumn wave. With some population groups, the increase was more significant than with others: in spring, during the first state of emergency, these were e.g. pupils and students (+ 44 %), the highest ABCDE socioeconomic group “A” (+ 41 %), university educated persons (+ 38 %) or economically active (working) viewers (+ 33 %). During the autumn wave, there was a more significant growth in viewing (although the year-to-year difference was less considerable compared to spring) with the “A” group according to the ABCDE socioeconomic classification (+ 34 %), with viewers from Prague (+ 28 %), with university educated persons (+ 28 %) and also a one-quarter increase (+ 25 %) with pupils and students. 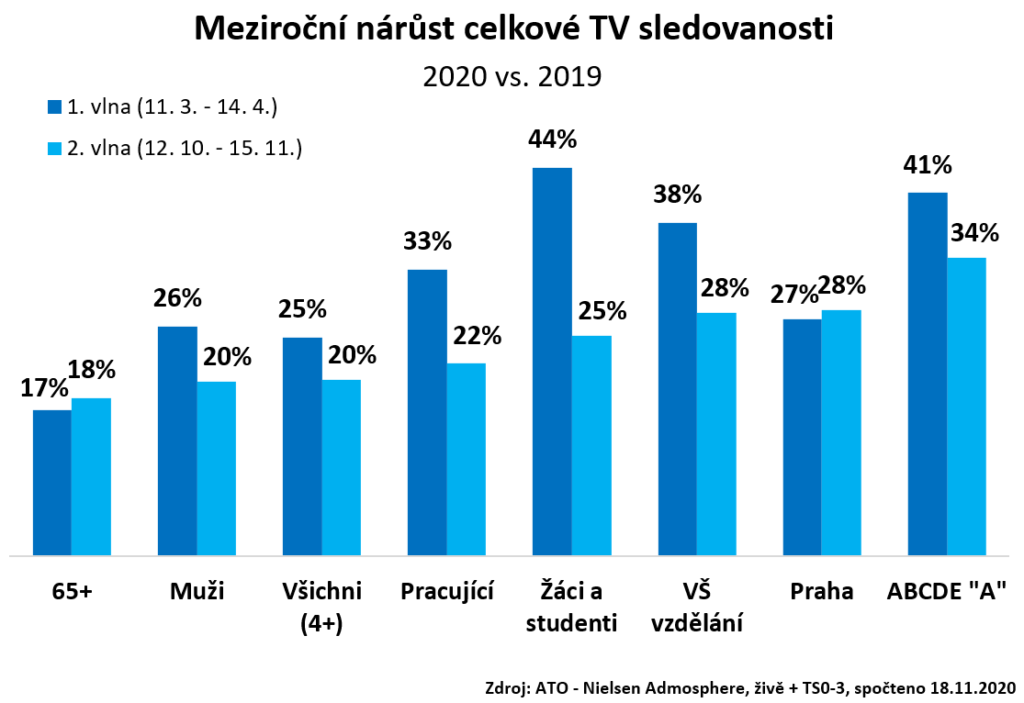 As for the time spent by watching specific types of programmes at the time of the pandemic, it was naturally news and public affairs programmes in particular that marked a significant increase this year during both waves of the pandemic – of course, both these programme types play a major role in informing the public on the development of the coronavirus pandemic and on the related governmental measures. Drama (series and films) and entertainment programmes are doing very well, too.

Due to advancing technical possibilities and changing viewing habits, the so-called delayed (time-shifted) TV viewing – i.e. watching programmes later after they had been broadcasted live – has been on the rise in the long term. This possibility is already offered to households by e.g. cable and especially IPTV operators or new types of smart TVs with the HbbTV function (hybrid TV, the so-called “red button”). This year on average, viewers in the 15+ target group watched (in the 0-7 day timeframe) over 22 minutes of TV broadcast daily in the delayed mode, which makes an 8 minute increase compared to last year.

The Peoplemeter project in the Czech Republic, particularly its integral part, the Continuous Survey, shows besides viewer ratings also trends in (not only) television households equipment. For example, its latest results demonstrate how the means of receiving TV broadcast have changed over the years in Czech households – including the period of the past year when people had to solve the transition to DVB-T2. Currently (according to the results for August and September 2020), TV channels are received via terrestrial digital broadcasting by 55 % of households and thus this means remains the prevailing way of TV receiving in the Czech Republic. In the long term, households prefer it to satellite (21 %), cable (17 %) and IPTV (15 %) receiving, even though they were obliged to get an additional set-top box or even a new, DVB-T2 ready television due to the transition.

Satellite and cable means of TV receiving generally tend to decrease slowly over the past years; on the contrary, IPTV – i.e. digital television transmitted via the Internet – has been on a slight rise. 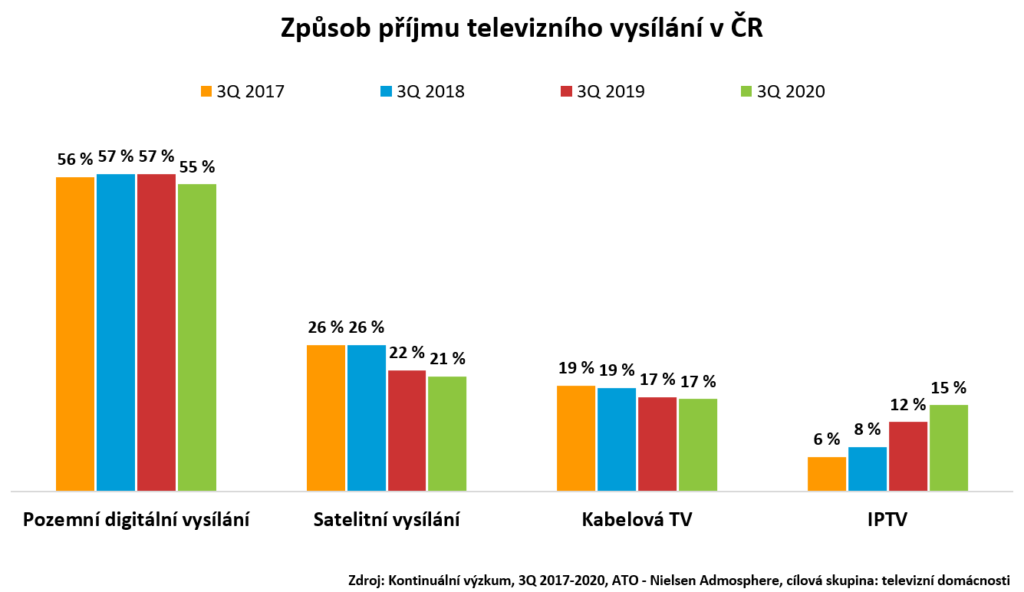