The viewing figures are growing significantly also in the group of young viewers, too. In addition, people are showing especially high interest in news programmes.

One of the fields strongly influenced by the current pandemic of the new type of coronavirus is TV viewing pattern. The viewing figures, provided to the Association of Television Organisations by Nielsen Admosphere measuring the TV audience using people meters, have experienced an increase by 45 minutes in recent days as compared with the previous period. More time spent watching TV is obvious also in the groups of the youth not going to school since 11 March. Owing to the development of the situation around the spread of coronavirus, also news programmes have been watched much more in recent days – it is true both for the main news programmes and for continuous coverage of news events. These days, television means the most important source of information about what is happening.

The TV viewing figures are collected under the Project  of Cross-Platform Electronic Measurement of TV Audience and Content Consumption (PCEM), on the basis of a representative sample of 1 900 households owning a television receiver, which corresponds to 4 450 individuals. The project is implemented by the research agency Nielsen Admosphere for the Association of Television Organisations.

As shown in the chart below, since Tuesday 10 March, when the government, responding to the coronavirus pandemic, prohibited cultural, sports and social events with participation more than 100 persons and announced closures of schools from the next day on, the TV viewing figures have shown a sharp growth in the Czech Republic. In recent days, the governmental measures, becoming stricter and stricter, making the out-of-home activities of the population significantly more and more limited, have contributed to an increase in the TV viewing figures in the target group of 4+ by 45 minutes a day (as compared with previous weeks). The viewing figures for the last seven days are even higher than the ones during the Winter Olympic Games in February 2018. These days, TV viewing figures are rising similarly in other countries, too (South Korea, Italy, U.S.A. etc.). 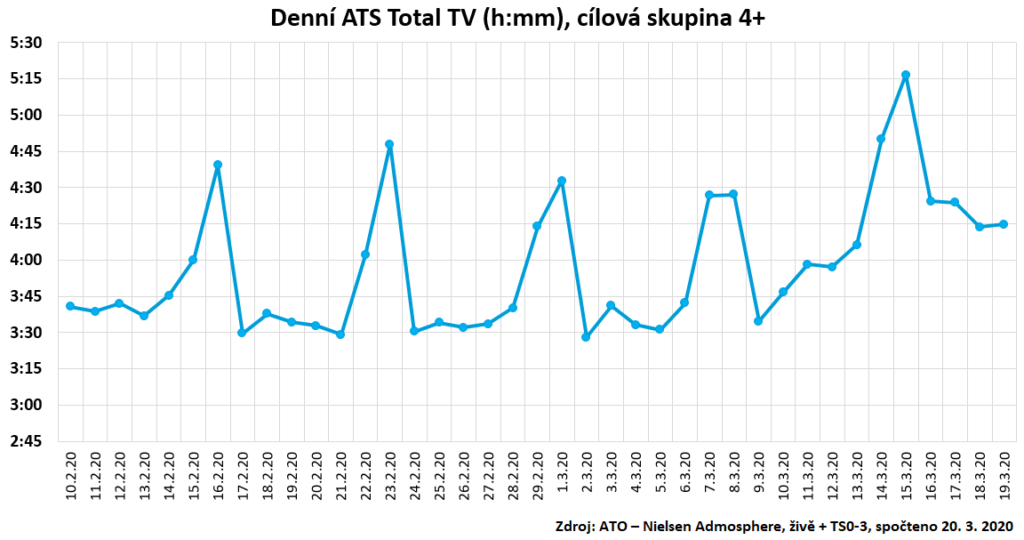 One of the groups whose viewing figures interestingly demonstrate that the population is more interested in watching television, is the group of pupils, students and apprentices, who have not been going to school since 11 March as a result of the restrictions imposed by the governmental decree. In the Czech population there are more than 1.6 million of such persons. The following chart compares the curves of the rating (% of the persons watching television at a specific time) in respect of this group for the average of the last five weekdays before closure of the schools and for the subsequent first five days from their closure. The boost is experienced predominantly at the usual times of the school attendance from 8 a.m. to 3 p.m., but also late in the evening, because the early getting up the next day does not take place. Which is also why the viewing figures at the times around 7 a.m. have dropped. 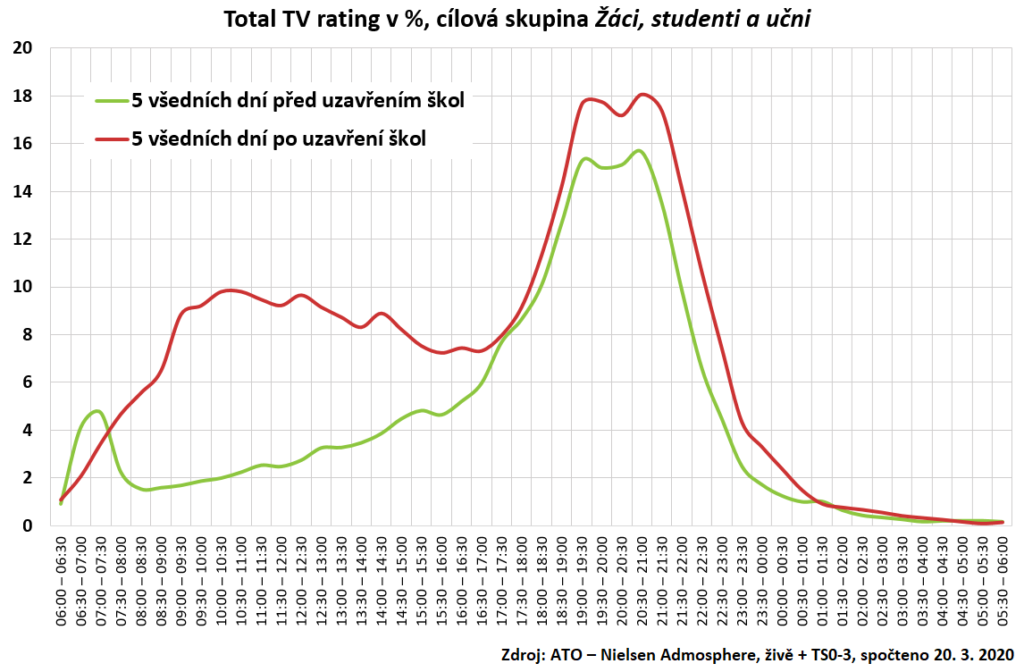 With the growing dynamics and strictness of the governmental measures against the coronavirus spread,   also the audience of TV news programmes has significantly grown since Tuesday 10 March. This is especially true for the main news programmes of all big television channels and of course also for continuous coverage of news events. During the last seven days, an average Czech citizen aged more than 15 years and having a functional television receiver watched on the average 67 minutes of news programmes on television a day, which means an increase up to more than a double the normal pattern. In the last 10 years, such large audience was attracted to TV news programmes only by results of the elections to the Parliamentary Chamber (26 Oct. 2013 and 21 Oct. 2017), the presidential elections in January 2013 and 2018, the floods early in June 2013 and the funeral of Václav Havel (23 Dec. 2011). Besides its universal coverage in news, public affairs and enlightenment programmes, the coronavirus topic has and will have also other impacts on the broadcasting patterns of television channels. In response to the occurred events, there are also changes in distribution of TV broadcasting happening and operators are negotiating with the Czech Telecommunication Office and with the Ministry of Industry and Trade about a new time schedule.